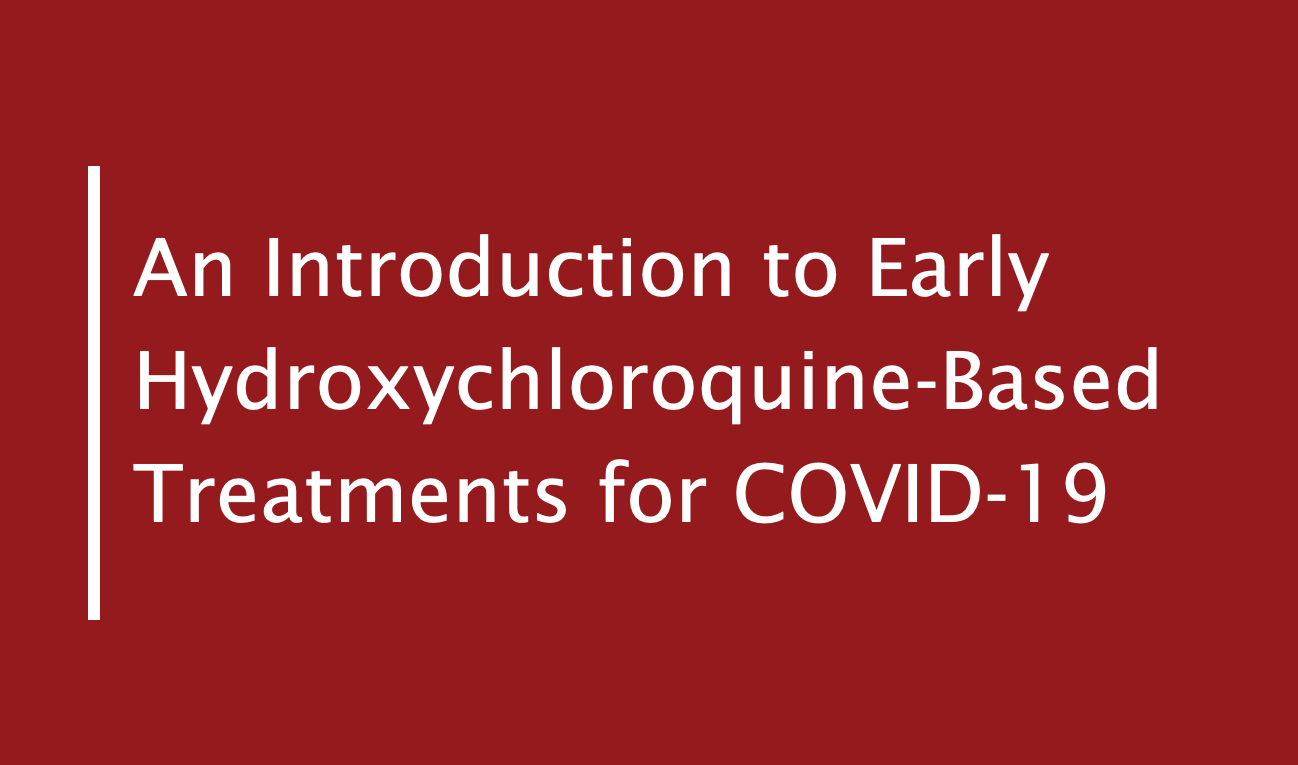 Hydroxychloroquine-based treatments for COVID-19 are recommended by experts such as Professor Didier Raoult for an early therapeutic intervention, typically within 5 days of the first symptoms. This therapeutic approach is now well established, with large clinical studies. Some countries are implementing the protocol, which is extremely cheap. In other countries, there is considerable skepticism.

We highlight here articles with key information about these treatments, their effectiveness in reducing mortality, their place in the evolution of the disease, their benefits in terms of reduced need for hospitalization, and their safety, including regarding cardiovascular health. Also provided is a recent list of scientific references.

You may also watch this high content interview with the esteemed Professor J. Varon, from Houston, Texas, where the importance of early treatment is highlighted.

About the effectiveness of early HCQ-based therapies

The most important study was done by Professor Raoult’s team in Marseille on 1061 patients who had COVID-19. Early treatment with hydroxychloroquine and azithromycin was provided. The study concludes that the “administration of the HCQ+AZ combination before COVID-19 complications occur is safe and associated with very low fatality rate in patients.”

About the treatments at the various stages of the disease

There is a growing understanding of COVID-19 as a disease, with a viral infection phase, followed by an inflammatory phase. Paul E. Marik, MD, Professor of Internal Medicine and Chief of Pulmonary and Critical Care Medicine at the East Virginia Medical School, has developed a comprehensive treatment protocol, for the various phases of the disease.

This work is done in collaboration with other experts such as Pierre Kory, MD, Critical Care Service Chief at the University of Wisconsin School of Medicine and Public Health in Madision, Wisconsin, and Joseph Varon, MD, Professor of Acute and Continuing Care at the University of Texas Health Science Center and Chief of Staff/Chief of Critical Care at United Memorial Medical Center in Houston, Texas.

Professor Marik distinguishes 4 phases: incubation, symptomatic, early pulmonary phase and late pulmonary phase. The detailed protocol aims at treating as early as possible and at avoiding at all cost ventilation and intubation.

About the effectiveness of adding zinc

While Professor Raoult and his team achieved outstanding therapeutic results, a recent research by Philip M. Carlucci & al. at NYU Langone Health indicates that the addition of zinc to the protocol improves therapeutic outcomes. 411 patients were treated with zinc, and 521 without. The patients were not treated as early as in the case of Professor Raoult’s research. Yet, as long as the patients did not reach a stage requiring intensive care, the therapeutic outcomes were found to be improved with the addition of zinc to hydroxychloroquine and azithromycin.

This brought Chris Martenson, PhD, who analyzes COVID-19 science and developments on a popular programme on youtube, to announce: “I’ll tell you what. If this is me, and I am me, and I end up getting this thing, I am going to want Zinc plus Hydroxychloroquine plus Azithromycin. I would want that treatment.”

About reducing the need for hospitalization

Consistently with the Marseille research, which was implemented mostly on outpatients, research in Brazil showed that, with a treatment combining hydroxychloroquine, azithromycin and zinc, there was a much reduced need for hospitalization. The study covered 636 outpatients – 224 of them having refused the treatment and having been used as control group. Follow-up was carried out via telemedicine.

The study concluded that “empirical treatment with hydroxychloroquine associated with azithromycin for suspected cases of COVID-19 infection reduces the need for hospitalization (p< 0.001)”

About the safety of hydroxychloroquine-based therapies

There has been considerable fear and misinformation that hydroxychloroquine combined with azithromycin was a serious risk for cardiac health, with, as a climax, The Lancet study by Mehra et al, that was soon proven to be a fraud and retracted from the venerable scientific journal.

How to assess the risk of early treatment? Best source of scientific information probably is again by IHU-Marseille, and the summary of their findings on a cohort of 3,737 patients, of which 3,054 (81.7%) were treated with the combination hydroxychloroquine and azithromycin. Regarding cardiac aspects, the summary notes: “QTc prolongation (>60 ms) was observed in 25 patients (0.67%) leading to the cessation of treatment in 3 cases. No cases of torsade de pointe or sudden death were observed.”

Drawing from is own experience, a French cardiologist Dr Alain Jean-Baptiste, had this to say about the Raoult Protocol and the issue of cardiac risks.  “The number of heart issues is minimal, because the very few cases that could have progressed in this way were discarded.” ““You have to remember that this is a medication that has been prescribed for over fifty years in billions of doses, and that there have been very few cardiac issues without massive ingestion … In addition, it is becoming increasingly clear that COVID-19 itself causes heart problems.”

An ample and growing academic literature

There is an ample and growing academic literature about hydroxychloroquine-based treatments. Here is a list of 50 references compiled on May 16 by the esteemed Professor Paolo Zanotto, who studied virology at University of Oxford and is a Microbiology Professor at Universidade de São Paulo. He has published extensively, including in prestigious journals such as Nature, Journal of Virology, Virus Research and Genetics.

Additional introductory elements about hydroxychloroquine-based treatments will be presented in the next parts of this article.

The author, Jean-Pierre Kiekens is an independent policy analyst, a former Lecturer at the Université Libre de Bruxelles, and a Graduate from the Universities of Brussels and Oxford.

Not treating people early can have consequences, tragic consequences. Dr Vladimir Zelenko recounts the story of a young Montreal woman who was refused early treatment. She is not an isolated case. Early treatment is denied to the people in Canada. @zev_dr http://covexit.com/dr-zelenko-interview-part-2/