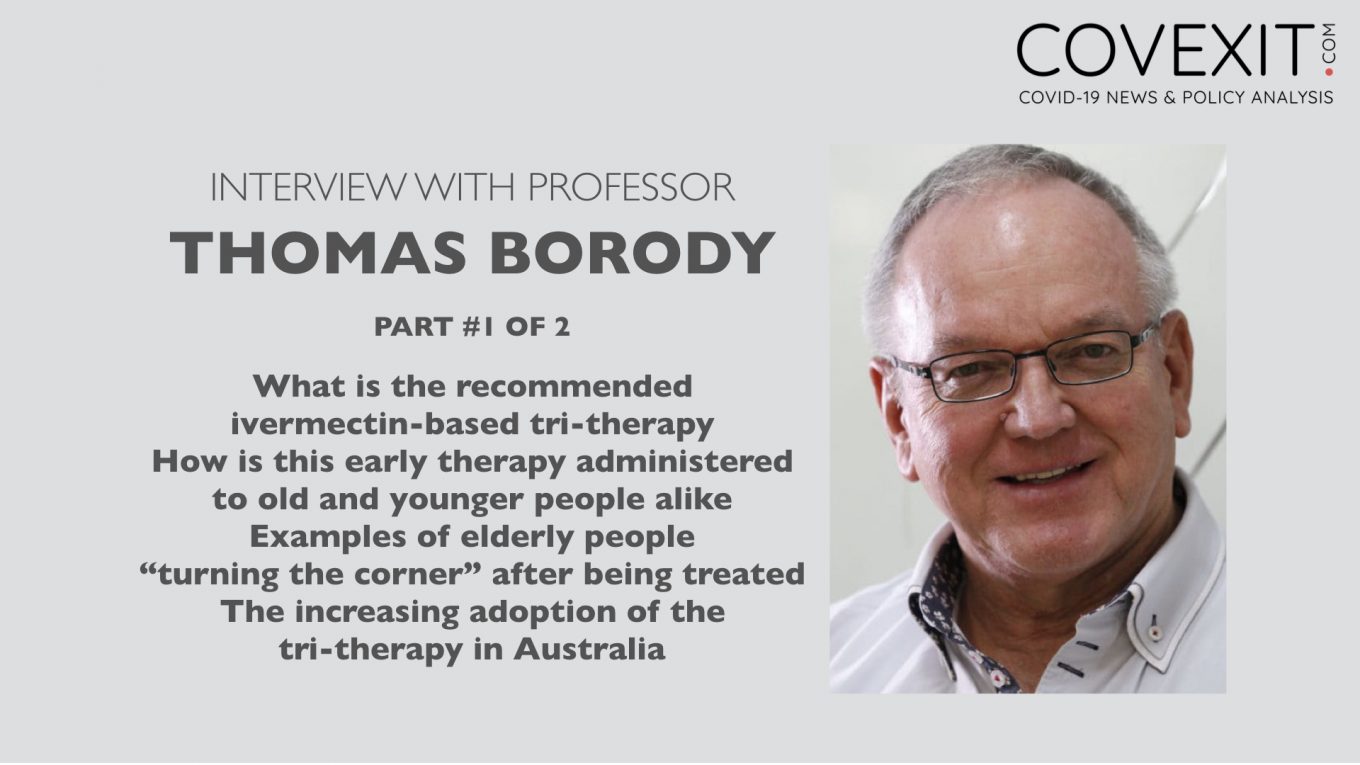 This is the first part of our interview with the esteemed Professor Thomas Borody, which covers the following aspects:

Professor Thomas Borody is a world renowned medical doctor from Australia with over 40 years experience in clinical research and practice, including at the St Vincent Hospital in Sydney and at the Mayo clinic in the US.

In 1984 he established the Centre for Digestive Diseases in Sydney. He oversaw its growth into an active clinical research institute with 65 employees.

Professor Borody has published numerous articles and is a reviewer for leading international medical journals.

With the pandemic, Professor Borody took a particular interest in researching a therapy for COVID-19, and this is what this interview is all about.

Here is the transcript of the first part of the interview.

I’d like to ask you maybe to start by presenting in a nutshell the therapy you recommend for covid19.

Thank you and that’s a big introduction and i thought i should start by introducing the medical aspects of my thinking in that my background is in gastroenterology and infectious diseases. So i spent a year training in infectious diseases in the tropics and Solomon Islands as well, but my main purpose is in fact in reusing or repurposing combined medications. So that’s where we ended up with the helicobacter work and the three products that have been FDA approved helidac pilera and topelia most recently the best examples of those is the therapy that we talk about, which is more than just Ivermectin but it’s Ivermectin with doxycycline and zinc.

Can you explain how do you treat patients with this with these three medications?

Well we treat them for 10 days using an appropriate dose of ivermectin, doxycycline daily and zinc daily. They all actually have activity against the intracellular multiplication of the virus and from published data you can read that most of the results have been close to 100 percent cure there was one that used the lower level and got 92 percent cure but it’s just hard to believe how simple it is to cure coronavirus.

As you know this is a contentious assertion you are making because officially there is no cure for covid19. What is your definition of a cure for a disease?

Right, well officially there was no cure for ulcer disease. Let’s never forget that those who don’t know will make such statements but cure is when a patient regains all the symptoms if they had any and that they are swapped negative on two different occasions.

Now we don’t treat people who are almost dead because that you missed the boat we treat the asymptomatic and the symptomatic and that way they do not go to hospital so there will be no symptoms in the end and no ventilators and no mortality.

So your focus today is outpatients?

Exactly that needs to be understood. Outpatients treatment. You haven’t missed the boat. If you treat too late,  yes there is a reduction in death rate, as published from Florida: about 48%,  which is much better than any other known drug. But i’m focusing on treating patients before they develop symptoms, hopefully when the viral load is low.

So it’s a it’s a similar approach to Dr Zelenko and his tai-therapy?

Exactly and I think he just hasn’t been listened to.

Are there contra indications to the therapy you are recommending?

Well the drugs are very well tolerated. From published literature, there are no category categorical contraindications. But this is an area where the doctor-patient relationship comes in and if for some reason there is an allergy to the doxycycline, well then the answer is obvious.

Concretely, I understand that you have an initiative to treat patients in elderly homes. Can you tell us about it?

There is no age limit in treating, and in fact, it has been used without any major side effects in pregnant women and children – even if we don’t recommend they should. But it works fairly well in elderly people. But remember, elderly people also have elderly immune systems, so it takes much longer for the swabs to become negative. But you can treat at virtually at any age and we have examples of people who just turn the corner in the sort of 60 to 70s three to four days but we’ve gone up as far as you know in the 90s and and people improve. So the attending GP treats the patient and it works in the elderly as well as in any other group.

Can you provide maybe some very concrete examples of people who were saved by the therapy?

Well, you’ll never know those were saved because you never compared with not treating them. But essentially, for elderly people, I’m just thinking of one lady who had not seen her family for six months, being in a nursing facility in the red zone as they call it. She had a marked cough, loss of appetite, she had some muscle aches, malaise and by day three to four she had marked improvement, regained her appetite, her cough improved. The cough took about 10 days to completely disappear. Others are currently on treatment in those areas and two others come to mind in our US trial caught myalgia, malaise and fever. These were patients in a placebo group, in a different trial, and so we have a rescue therapy and the ivermectin based rescue over the next two days got them to experience rapid improvement, which is a fascinating phenomenon to watch how quickly patients turn around, I mean some of them in just hours, and they call back our counterpart in the US and say look I’m so much better. I have never seen helicobacter treatment do that, so I’m just trying to say that this is such a unique therapy I’ve never come across anything like this in treating infectious diseases. I mean Crohn’s takes six weeks to change symptoms.

Well you may have noticed that this has become much better known in Australia through the media and both families and general practitioners are starting to treat more people.

What about young people people, those not above say 60 and who don’t have co-morbidities? Are you treating them too?

If someone’s positive on a swab, we treat them, but if they have to live close to someone who is being treated, I would recommend some lower dose preventative treatment. And that would be safe because you really need about three days and you’re no longer infective.

What kind of research mechanism are you implementing to monitor and to report on your results?

Well we are treating everybody mainly because we cannot make a decision between who shall live and who shall die. We’re using historical controls specifically in the aged care facilities. If it was something like a disease like hypertension, we would have a placebo arm, but you cannot really have that in a situation where there is no alternative treatment.

Regarding the information from treating various patients, are you planning to gather it and analyze it and publish it?

Exactly, we will be comparing those that straight observational data with retrospective historical data from the same homes. It will not be the ideal situation, but we are forced by this type of condition to have to go this pathway.

If anyone suggests a randomized controlled trial, it tells me they don’t know what they’re talking about.