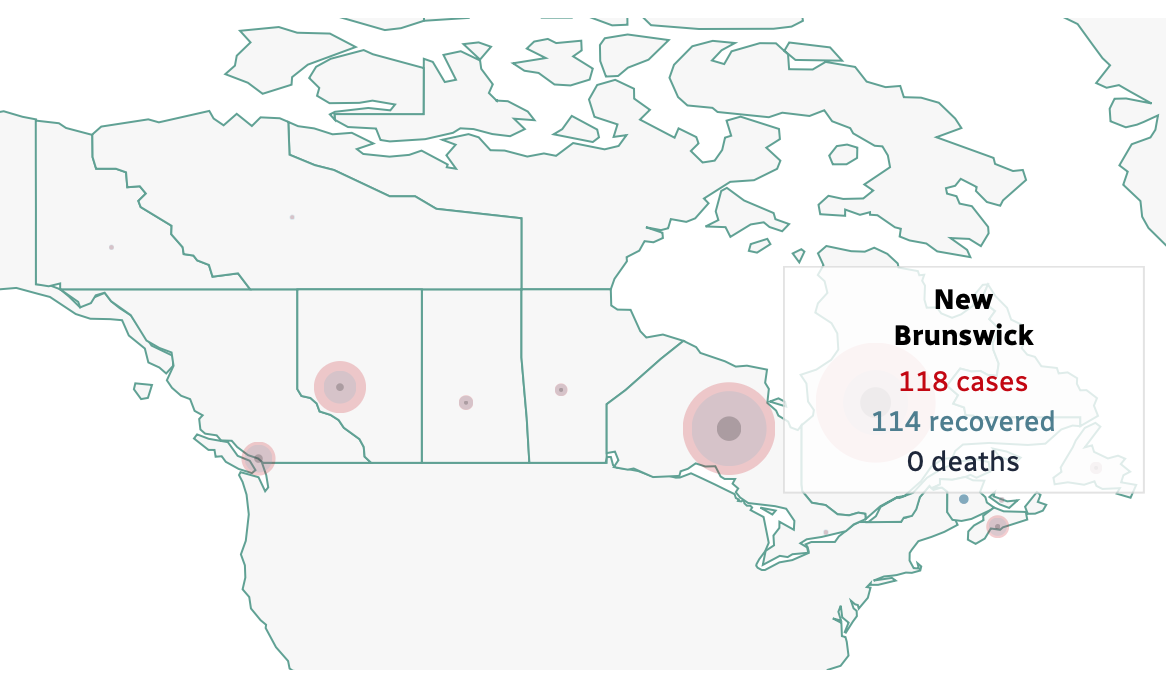 When compared to its neighbour Quebec, the Province of New Brunswick shows extraordinary results in its fight against COVID-19.

Note: this article is translated from the original in French, published on April 28.

Of course, Quebec has a population approximately ten times greater in number than New Brunswick: 8.48 million versus 0.78 million.

The number of cases there is 212 times higher, therefore per capita, it is about 20 times more in Quebec than in New Brunswick.

In New Brunswick, there have been no cases of outbreaks in seniors’ residences, while such outbreaks are raging in Quebec, with already a multitude of deaths to be deplored and a real crisis in the management of these residential homes.

Note that the neighbouring province of Nova Scotia, with a population comparable to that of New Brunswick, with 0.97 million inhabitants, has 24 deaths, for a total of 900 cases, of which 509 have recovered.

Various demographic and geographic factors explain the limited spread of the pandemic in New Brunswick, in particular few large urban centres, a low population density, an international airport with much less traffic than that of Montreal.

But there is also an essential factor that must be emphasized: effective proactive measures on the part of the government, which is showing exemplary prudence even today, while the health situation relating to COVID-19 is clearly under control in the province.

To date, the province has had no deaths, and only a handful of “active” cases remain – that is, people who are sick and not yet cured. None of them are in intensive care.

The government press release of April 27 is worth noting. Here are some excerpts.

“For the ninth consecutive day, Public Health has reported no new cases of COVID-19.”

“The number of confirmed cases in New Brunswick is 118, the number of active cases is six, and 112 people have recovered. Three people remain hospitalized, and there are no patients in an intensive care unit. “

“Dr. Jennifer Russell, chief medical officer of health, said that while testing results remain encouraging, real success against the COVID-19 virus will be measured by New Brunswick’s ability to manage new outbreaks as they occur.”

Some restrictive measures are now relaxed, but caution continues to prevail.

“It is now possible for families and neighbours to visit another household unit, or “bubble.” Both households must mutually agree to only get together with one another. Individuals must limit their gatherings to these two households only. ”

“Golf courses, driving ranges, beaches and parks can now open, as long as physical distancing and safety measures are in place. All public playgrounds are still off limits, including those in municipal parks, provincial parks and at schools.”

“Team sports, motorcycle gatherings and any gatherings of vehicles are still not allowed at this time. Driving ATVs is permitted, however, trails are not yet open.”

There is therefore great caution at the level of the authorities, while there have been no new cases for 9 days, and only 6 people, all treated and whose lives are out of danger, are still positive.

As for schools in New Brunswick, they will remain closed, and there is no plan to reopen until the 2020-2021 school year begins.

However, the province has embarked on an extensive online learning program. The province even encourages high school students in grade 12 who want to start their post-secondary education earlier by signing up for distance education courses offered during the spring and summer terms.

“Even though schools across the province are closed, we remain committed to helping students continue their education,” said Education and Early Childhood Development Minister Dominic Cardy.

Minister Dominic Cardy (in picture) actually played a major role in tackling the COVID-19 crisis in New Brunswick. Very early on, he conducted analyzes and prepared a detailed 19-page memorandum, sent on February 24 to his colleagues in the government, to propose a comprehensive set of measures to be taken at the provincial level.

At the same time, Minister Cardy and his department were already preparing school closings. A controversial but excessively important decision was to impose a 14-day quarantine after the March break ending March 8.

It was already well understood that it was not a question of if, but when, the pandemic would reach the province. In fact, in British Columbia, where the virus was rife earlier, the decision to close schools was made on March 17.

In New Brunswick, quarantine became mandatory for all students who stayed outside the province, including those returning from overseas travel, whether symptomatic or not.

In Quebec, such a measure was not taken, students returned to school with the main measure being washing their hands … and we already know that many cases of outbreaks, which created the ensuing health crisis, are linked to returns from trips during spring break, from Italy for example.

The wisdom and prudence of Minister Cardy and of the Government of New Brunswick are underscored by the University of Toronto infectious diseases and epidemiology specialist, Colin Furness PhD.

“Children mixing in schools is a really potent way for infections to spread.”

It should be noted here that in Quebec, where the pandemic is raging and is far from being under control – 875 new cases in a single day yesterday April 28 – the government is preparing to reopen nursery and primary schools on 11 and May 19, that is to say in just 2 or 3 weeks.

The Premier of Quebec claims: “We are on the way to winning this first battle against the spread of the virus in the community,” a statement clearly detached from the reality of the pandemic that is raging in the province.

In Quebec, just yesterday, according to official statistics, the number of deaths increased in a single day by 84 people, or 5.5%.

According to the undersigned, this decision of the Quebec provincial government to re-open schools is completely irresponsible. We’re not going to live in a house when it is burning. Even on an educational level, it doesn’t make sense, since the school year is almost over.

Coming back to New Brunswick, we must highlight the considerable work that has been done in terms of screening.

Very early, as of February 11, the province has had a capacity of 300 to 600 tests per day, ahead of many jurisdictions.

To date, the National Microbiology Laboratory has carried out more than 25,000 tests, with results typically provided within 24 hours.

In practice, people who suspect they have caught the virus call the TeleHealth line at 811, and are immediately referred to a clinic for a test. Patients can also be referred quickly via a faxed request to the screening clinic by their family doctor or a nurse practitioner. A doctor is assigned to each clinic.

The test result is communicated by phone but is also available online, using a code communicated at the time of the test.

The authorities’ messages were clear: in case of symptoms, contact TeleHealth and get tested. In the event of a positive test, the person is very quickly contacted and taken care of medically.

Around mid-March, discussions between doctors, pharmacists, officials of the two health networks and government officials also concluded on the importance of treating the disease early, according to a protocol inspired by the work of Professor Didier Raoult in France.

We covered New Brunswick’s announcement on early treatment with hydroxychloroquine on April 3.

What about the use of this treatment? We spoke to Dr. Gabriel Girouard, the doctor specializing in infectious diseases and medical microbiology at the Dr-Georges-L.-Dumont University Hospital in Moncton. He also works at the provincial diagnostic reference center for virology.

Dr. Girouard indicated that the program has been successfully implemented, and that several patients are now enrolled in a province-wide registry and are part of an observational study.

Few patients were, however, treated with this therapy due to the very limited number of cases in the territory, and the fact that they often did not meet the treatment criteria linked to risk factors such as age (50 years and more), presence of comorbidities, or unfavourable clinical course.

Fewer than ten patients have been treated with hydroxychloroquine in New Brunswick since the start of the outbreak. But the province was prepared to handle many more cases in this way, if necessary.

New Brunswick may have been lucky, as it has less dense urban centres than Quebec, and also much less international air traffic.

But it is absolutely necessary to highlight the remarkable work, in terms of governance of the pandemic, that has been done, and continues to be done.

The big question everyone obviously asks is about the future.

With the very small number of cases in New Brunswick, there is no group immunity at the population level, nor will there be any in the future either.

In fact, and according to various studies done in several places on the planet, including Iceland and Switzerland, just a small proportion of the population, perhaps a few percent, has typically been exposed to the virus.

In other words, the vast majority of the population is not immunized and remains vulnerable to new infections, which may reoccur at any time, especially after restrictions, to travel in particular, are relaxed.

In other words, the vast majority of the population is not immune and remains vulnerable to new infections, which may come back at any time, especially once restrictions, particularly on travel, are relaxed.

New Brunswick is very cautiously engaging in relaxing restrictions. And the challenge ahead will be to manage new infections, which sooner or later may arise.

In this context, the exemplary systems in place, particularly in terms of rapid tests, immediate patient management, and therapeutic intervention by early treatment of the disease, will certainly be essential in the future.

The challenge is indeed to manage the virus in the medium term, to avoid any second wave of any magnitude, while managing a gradual return to normal economic and social life.

It is probably in the best interest of the world to pay attention to what New Brunswick is doing, not only for its remarkable successes to date, but also for what is ahead.

If the pandemic is already regressing in many regions around the world, good management of re-infections will determine medium and long-term success in the fight against COVID-19.

The author, Jean-Pierre Kiekens, is an independent analyst and former lecturer at the Free University of Brussels. He graduated from the universities of Brussels and Oxford.