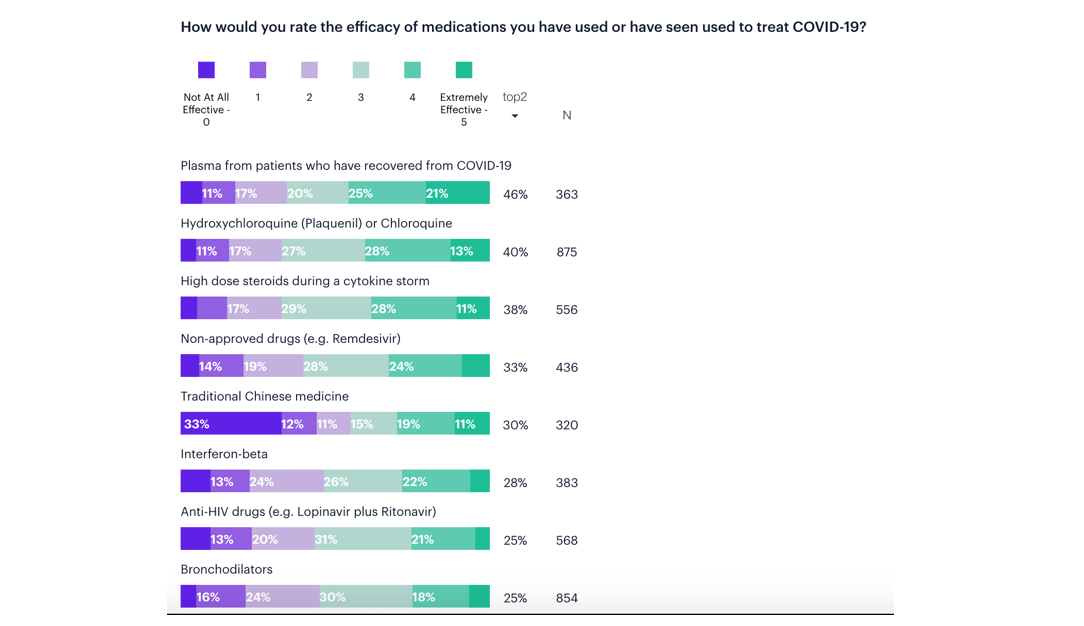 The most recent update of a survey of some 4016 medical doctors world-wide indicates a rise in prescriptions of of Azithromycin and Hydroxychloroquine for COVID-19 treatment. The survey was conducted by the Sermo institute and covered the April 3 to 9 period.

The top three treatments that doctors reported having prescribed were Azithromycin (58%), Hydroxychloroquine (50%), and Bronchodilators (48%); traditional Chinese medicine has been used by 67% of physicians in China.

Regarding perceived treatment efficacy, physicians who treat COVID patients in Italy, Spain, France, and China have higher perceptions of Hydroxychloroquine’s efficacy vs the US (~50% vs 29%).

The top treatments that have been used/seen used and reported as very or extremely effective among COVID treaters (N= 1337) include: 46% plasma from recovered patients (n=363); 40% Hydroxychloroquine (n=875); 38% high dose steroids during a cytokine storm (n=556).

Note that among those, countries such as the UK and Canada are opposing treatments such as the the Azithromycin and Hydroxychloroquine combination. If medical doctors in such countries had the right to prescribe them, the global numbers would be even more in favor of these drugs.