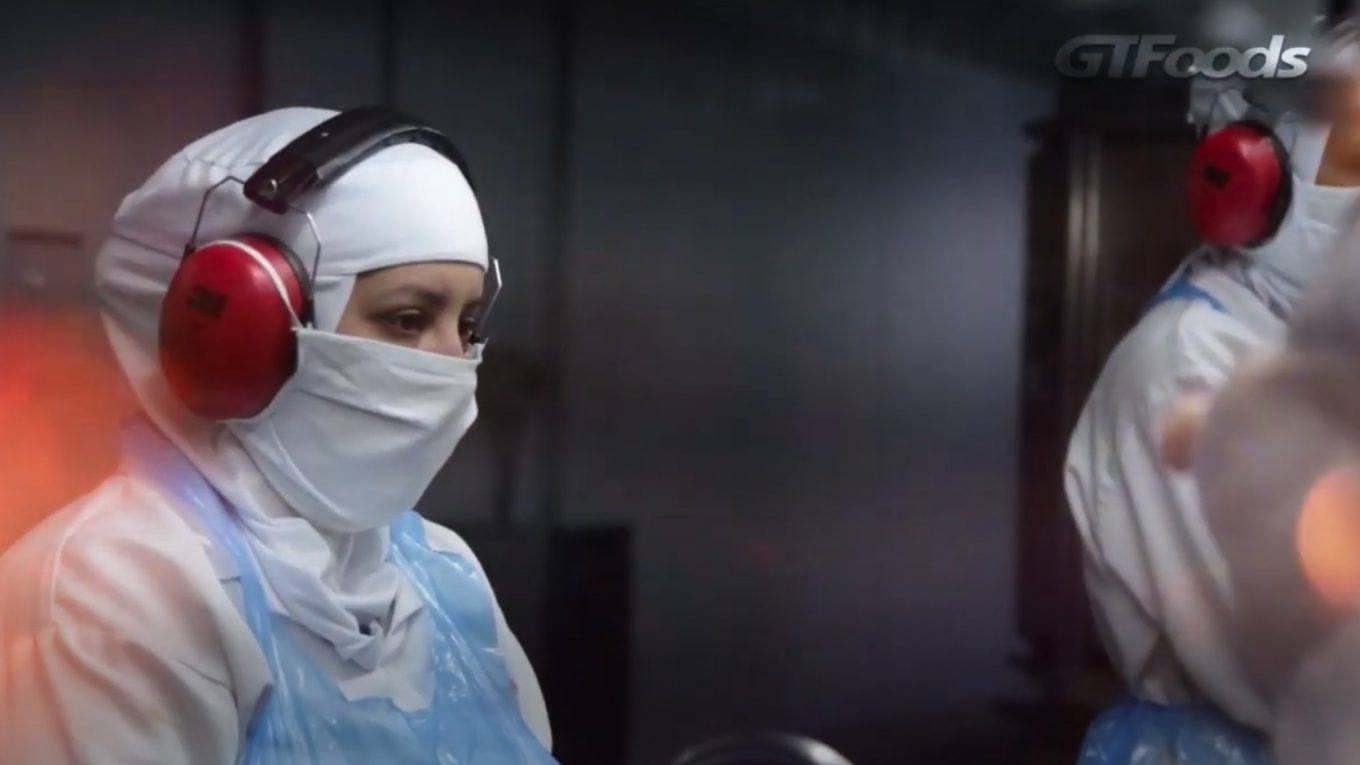 This article presents a real world experience in a major food processing corporation in Brazil, with 12,000 employees, where there were increasing COVID-19 infections despite measures in place to limit contagion. On top of these measures, the medical doctor in charge of occupational health and safety, with the support of the corporation’s board, implemented a health promotion / prophylaxis program, which brought down new infections to zero, within weeks. Outbreaks were brought under control, while the situation could have easily gotten out of control without prophylaxis. This program is described in the second part of the article. In the first part, conventional contagion control measures, which exclude prophylaxis, are described, drawing from the regulations in place in two Canadian jurisdictions – British Columbia and Ontario. (Version Française)

Imagine you are in charge of the occupational health and safety of 12,000 workers, with hundreds of them working in the same closed areas, while COVID-19 is known to be widespread.

Knowing that SARS-CoV-2 is an airborne virus, that transmits very easily in closed areas, what can you possibly do to avoid outbreaks, disease, possible deaths, and also massive absenteeism with employees being forced into quarantine?

That was the situation faced last July by Dr Adler Menezes Dourado, a medical doctor specialized in occupational medicine but also with expertise in intensive care, rheumatology and cardiology, who is in charge of occupational health and safety at the major food processing company https://www.gtfoods.com.br/ having some 12,000 employees.

Food processing, especially meat packing, have been largely affected by COVID-19 outbreaks in the US, Canada, UK, Germany, France, Spain and elsewhere.

What is remarkable with this real world experience out of Brazil is that a preventative therapeutic means was used to rapidly contain an outbreak, while the norm, when it comes to occupational health and safety regarding to COVID-19, is to exclusively rely on non-therapeutic means.

In this instance, the therapeutic means was ivermectin prophylaxis.

Note the parallel to be done with nursing homes, where the vast majority of jurisdictions have used, and continue to use, only non-therapeutic measures, supposed to control contagion, to contain outbreaks.

As we have analyzed at length in previous articles, the huge mortality in nursing homes, even with extremely strict contagion control measures, making the lives of residents miserable, is a sad testimony of the ineffectiveness of such non-therapeutic measures.

Before presenting you this Brazilian experience, let’s analyse what kind of measures are typically recommended when it comes to occupational health and safety regarding COVID-19, on the basis of two examples: Ontario and British Columbia in Canada.

In British Columbia, employers are required to develop a COVID-19 Safety Plan that outlines the policies, guidelines, and procedures they have put in place to reduce the risk of COVID-19 transmission.

At first, it’s recommended to “use policies and procedures to keep people at a safe physical distance from one another, to “limit the number of people in your workplace at any one time,” and “implement protocols to keep workers at least 2 metres” from others.

The second level of protection is to use “engineering controls” by which you install barriers such as plexiglass to separate people.

The third level protection is referred to as “administrative controls” and requires to establish rules and guidelines, such as cleaning protocols, telling workers to not share tools, or implementing one-way doors or walkways.

The fourth level protection involves PPE, particularly masks, the use of which is to be considered: “consider the use of masks” and “ensure masks are selected and cared for appropriately and that workers are using masks correctly.”

At the link below, you can find more specific guidelines, but none of them of a therapeutic / prophylaxis nature.

To be noted is that, absent from these guidelines, are any requirements regarding ventilation systems to mandate effective filtration and avoid recirculation of potentially contaminated air.

Let’s have a look at the governmental document titled: “Food manufacturing and processing health and safety during COVID-19.”

The document states: “To prevent the spread of COVID-19, everyone should comply with requirements under the Occupational Health and Safety Act and with associated regulations and public health directives issued by the Chief Medical Officer of Health.”

Regarding protecting yourself and your co-workers, the document covers aspects such as Wash your hands often with soap and water or alcohol-based hand sanitizer, sneeze and cough into your sleeve; avoid touching your eyes, nose or mouth; Stay home if you are sick; etc. Regarding physical distancing, a two meters distance is required; limit the number of people working in one space at the same time; etc.

There are various considerations regarding sanitation, including hands washing; sanitizing commonly-touched surfaces; cleaning washroom facilities. There is a paragraph on ventilation, but which is probably difficult to implement in a Canadian (long winter) context: “Introduce more fresh air by increasing the ventilation system’s air intake or opening doors and windows. Avoid central recirculation where possible.”

Other considerations related to production schedules; tracking employees within facilities (for possible track and trace in case of infection); reporting illnesses; and conducting risk assessment if it’s believes one of the workers has COVID-19.

See also this BBC article about the conventional wisdom as how to handle COVID-19 in meat processing plants: https://www.bbc.com/news/53137613,

Like any medical doctor in charge of health and safety in an industry known for many COVID-19 outbreaks, Dr Adler Menezes Dourado was facing a choice. Just follow the the various measures aimed at contagion control, or try to do better, much better. He opted for the latter approach.

He designed a plan aimed at the prophylaxis of workers with ivermectin. This occurred in the month of July 2020, when there was already widespread use of ivermectin in Brazil, especially through the outpatient treatment initiative that was led by the amazing Dr Altino de Almeida and soon attracted thousands of medical doctors throughout the country.

Watch our detailed interview, in three parts, with Dr Altino de Almeida for detailed information about this “Doctors for Life” early treatment initiative, that contributed to treat thousands and thousands of Brazilians at home, instead of relying on the overburdened hospital system.

Dr Adler Menezes Dourado presented his plan to the board of the corporation in early July, and it got approved. It was probably a first in Brazil, especially for such large corporation, even if early treatment has been embraced by Brazilian corporations such as Prevent Senior – a network of retirement homes – much earlier in the pandemic.

There are two videos where Dr Adler Menezes Dourado explains his experience. The short one is on the Beija-Flor on naTV, the longer one is on the program “Estudio de Caso,” is much more detailed. The interview is conducted by a very experienced health journalist, Fernando Beteti, who also happens to be the CEO of the supplements company Nutrigenes. https://www.fernandobeteti.com.br/

You are invited to watch both videos and to activate the subtitles and their automatic translation.

Here is a summary of what is explained. In July, Dr Adler Menezes Dourado increasingly found that the anti-contagion sanitary measures were insufficient to prevent transmission and COVID-19 outbreaks, in the various plants run by the company.

He explains that a single plant can hold up to 500 employees at the same time. He also explains that the workers come from more than 35 cities in the region, and it was not possible to figure out where the contaminations were coming from.

The company has 12,000 employees, and he was soon getting 10 to 15 positive tests per day, meaning sending those workers in quarantine, but also facing the likelihood of more cases in the coming days, because of contagion.(remember, a test becomes positive only several days after infection)

He explains there were two shifts per day, operating separately, with a period in between for cleaning and disinfection. One of the two shifts had many more cases than the other.

The prophylaxis program was started on July 27th. There were at that time 143 positive patients in quarantine for 10 days. It’s not clear if those patients received early outpatient treatments, but they probably did.

Dr Adler Menezes Dourado explains that, following this sharp decline in infections during August, the situation has remained largely under control until now.

He mentions however that there were some cases of infection, underlining that the program was voluntary. He also explained that, in some plants, there was lower adhesion to the protocol.

The regimen, he explains, was a pill of 6 mg of Ivermectin per 30 kg of body weight, with a max of 18 mg, per week, for an initial duration of 4 weeks. From the videos, it’s not clear what was the prophylaxis administered after that.

Dr Adler Menezes Dourado presents his initiative as a health promotion protocol, as a prophylaxis protocol, and he insists it’s no panacea.

He also recommends supplementation during this C19 crisis, especially with vitamin D.

The conclusions to draw from this experience are far reaching. COVID-19 was rapidly brought under control through this prophylaxis program, for some 12,000 employees, with much lower infections and disease.

Health benefits certainly occurred also outside of the company, as the program reduced the risk of infection of others, at home, in public transportation, etc.

It took just a month to bring the situation under control, while the situation could have been rapidly out of control in case this program had not been implemented.

The benefits to the company of avoiding constant and possibly severe disruptions in the operations, because of new infections and quarantines, are considerable.

While the details are not public, it was obviously a very cost effective program, as Ivermectin is extremely cheap.

While focused on occupational health and safety, it’s clear that this program also contributed to the social responsibility of the company. In layman terms, the company did the right thing.

The company was not obliged to do this. It gave it a try, achieved complete success, and is now an example to the world.