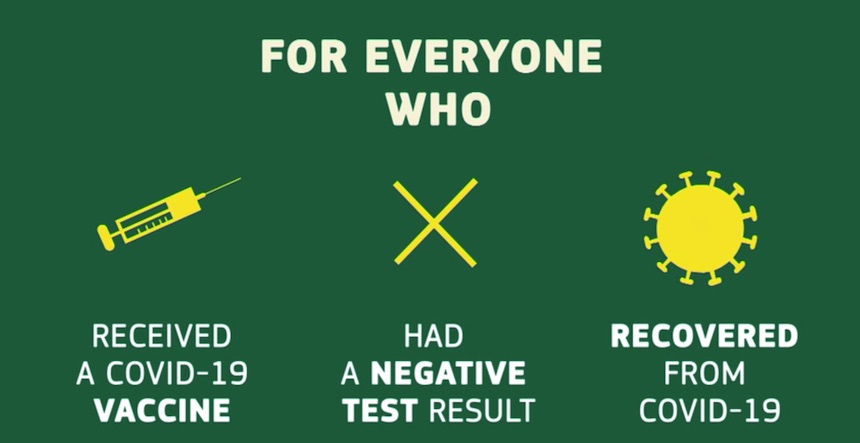 Digital Green Certificates: What Could Possibly Happen in Practice on Planes?

The European Commission has issued this March 17 a Regulation proposal for “Digital Green Certificates” in Europe.

“Based on the technical work carried out so far, the Commission proposes to establish an EU-wide framework for the issuance, verification and acceptance of vaccination certificates within the EU as part of a “Digital Green Certificate”. At the same time, this framework should also cover other certificates issued during the COVID-19 pandemic, namely documents certifying a negative test result for SARS-CoV-2 infection as well as documents certifying that the person concerned has recovered from a previous infection with SARS-CoV-2.”

Hence: three avenues are foreseen to have a valid certificate: vaccination, negative tests and recovery from previous infection.

Despite many calls for such regulation not to be adopted, because of restriction to freedom and other important issues it raises, it appears that adoption of such regulation is very likely, even if it requires the approval of all the member states.

But what could happen in practice?

A naïve reading of the regulation is that, to take a plane for example, everything will be fine and safe if all the people have such a digital green certificate, demonstrating either prior vaccination, having a recent negative test, or having recovered from the disease.

But the reality may be very different. To look at this, let’s just imagine a few scenarios, involving each time three hypothetical travellers, flying from an airport in Europe to say Greece or Portugal, two countries very keen to have this regulation approved, to support their tourism.

Scenario 2: Isabelle; Lucas and Ben, and the UK variant

Here, let’s assume both Isabelle and Lucas have been vaccinated while Ben has a negative test. In this situation, let’s also assume that Ben is truly negative, but that Lucas, even if vaccinated, contracted the disease with no or mild symptoms. In this case, Lucas can start shedding the virus. Let’s assume here it’s the UK variant. It propagates rapidly, giving the disease to Ben and also infecting Isabelle. Isabelle will likely develop only a mild form of the disease. For Ben, it’s unclear, as he has no protection except for his natural immunity. The outcome remains the same as with Scenario 1: the three can end up infected, while they were all three allowed onboard.

Scenario 3: Emily; Julian and Ethan, and the South African variant

Here let’s assume Emily is vaccinated; Julian has a negative test; Ethan has recovered from C19.  Let’s assume here that Julian has a false negative test (very common) and that he actually is infected and becoming contagious with the South African variant. As all current vaccines are known to have little effectiveness against this variant, Emily catches the disease. For Ethan, who has already recovered from C19, it’s a bit unclear, yet from the knowledge available so far, he should still be protected. With the South African variant, only those having recovered from the disease may have  real protection.

Here, let’s assume Madison is vaccinated while Henry and Samuel have both PCR negative tests. In this case, let’s imagine Samuel has the recently identified Brittany variant (clade 20C), which is still little known but which has for characteristic to remain undetected by common PCR tests. In our example, Samuel can board the plane thanks to his false negative test, and he can easily pass the virus to both Madison and Henry. Henry has a negative test and is therefore vulnerable to an infection with this variant. For Madison, she can be infected – current vaccines don’t prevent infections – and her fate is unclear, as it is not known if current vaccines do protect against this still little known variant, so the protection she enjoys, if any, against this variant, is unclear.

Here Owen is vaccinated, Patricia has a true negative test and Olivia has recovered from C19. Let’s assume here that Owen, despite his vaccination, got infected and is shedding the virus. Patricia has a true negative test and has no protection beyond her natural immunity. Olivia got back luck. She did not realize that her Digital Green Certificate was already 180 days old and was not valid any longer. Although still immune, she is prevented from boarding the plane. Here Owen passes on C19 to Patricia, who thought she was safe, but wasn’t. The only one of the three who would have been safe on the plane, Olivia, was precluded from flying.

All the fifteen hypothetical characters mentioned in these 5 scenarios, except for Olivia in Scenario #5, would be allowed to fly, with their “Digital Green Certificates.”

In all five scenarios, people are allowed to fly but infections, including with variants, can occur on board.

Despite its many flaws, the regulation seems on its way to be adopted at the European level.

At the personal level, note that, if you want to fly safely, you may want to adopt the extra measures suggested by Professor Marik at our December 17 Webinar, combining Ivermectin prophylaxis and N95 Masks. Also, avoid removing your mask, i.e. avoid meals, drinking, and refrain if possible from using the bathroom.

Because you don’t want to fly unprotected, knowing that the Digital Green Certificates are unlikely to offer you true safety onboard.

The Conservative Party of Quebec (@PconservateurQc) has alleged that the province’s former top doctor Horacio Arruda resigned because Legault’s controversial tax on the unvaccinated was a “bulls**t” COVID-19 measure. #cdnpoli

BREAKING (AP) -- Starbucks is no longer requiring its U.S. workers to be vaccinated against COVID-19, reversing a policy it announced earlier this month.