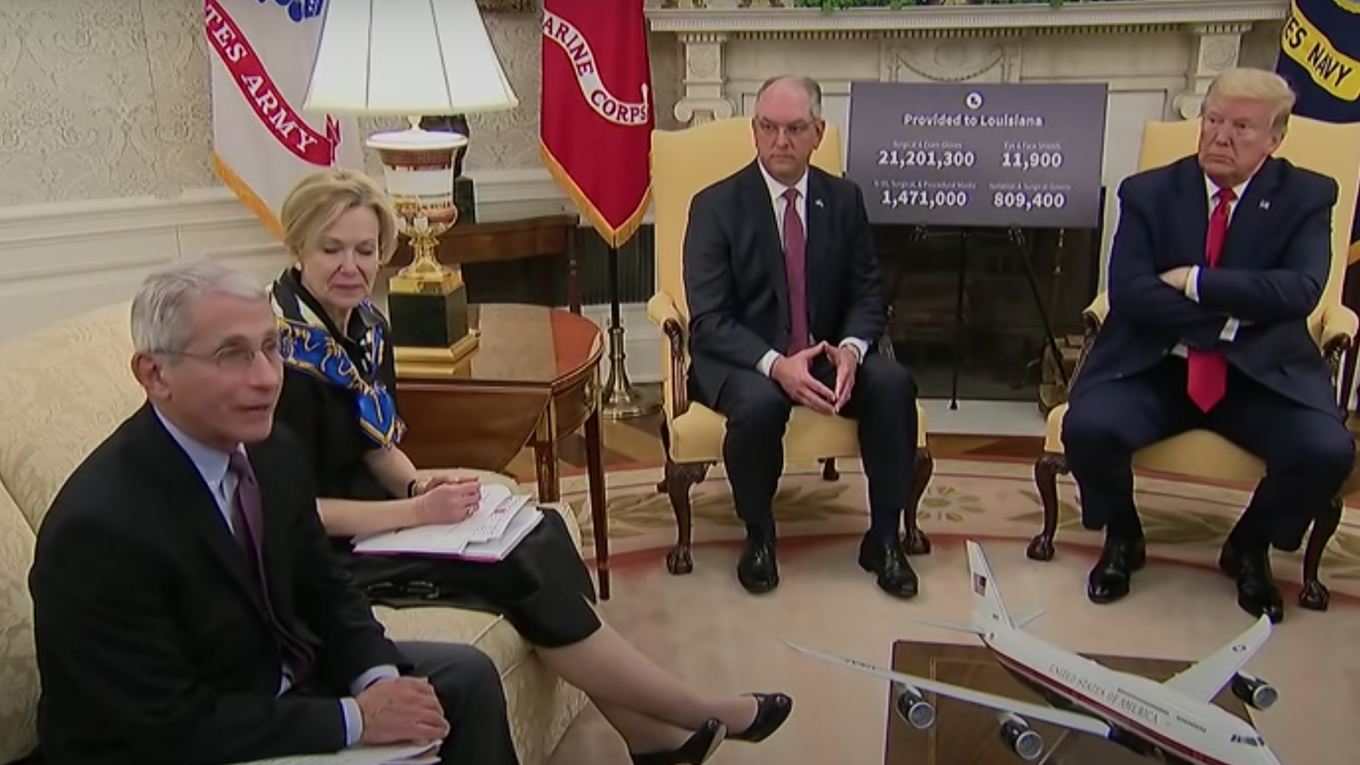 This is really a special remdesivir day!

We already covered today the just published randomized Chinese study in The Lancet, with 237 patients, according to which “remdesivir was not associated with statistically significant clinical benefits.”

The Chinese study also shows adverse effects in 66% of treated patients. The Chinese study notes that, “although not statistically significant, patients receiving remdesivir had a numerically faster time to clinical improvement than those receiving placebo.”

This looked like a very bad day for remdesivir. But here came the announcement by Dr Anthony Fauci, made at a media conference at the White House with President Trump being present.

Dr Anthony Fauci went a step further, asserting that remdesivir would now become the Standard of Care, i.e. all patients, at least in clinical trials, would get that drug by default.

“Whenever you have clear-cut evidence that a drug works, you have an ethical obligation to immediately let the people who are in the placebo group know, so that they can have access. And all of the other trials that are taking place now have a new standard of care.”

Update April 30 9 am EST: Here are two first reactions, on Twitter, of Professor Didier Raoult, who points to the fact that the Fauci endorsed study does not show reduced mortality, similarly as the Chinese study, but also to a change of goal in the Fauci study – with reduced death being removed as primary goal, and replaced by reduced time to recovery.

Absent from the speech, totally ignored by Dr Anthony Fauci, was hydroxychloroquine and all the research already done about it.

A study by Professor Raoult’s team in Marseille, combining hydroxychloroquine with azithromycin for the treatment of COVID-19, found that virus cultures from patient respiratory samples were negative in 97.5% patients at Day5.

The treatment “allowed patients to rapidly be discharged from highly contagious wards with a mean length of stay of five days.”

Dr Anthony Fauci did not refer either to the landmark study by Professor Raoult and his team, on 1061 patients, that showed that:

For a more recent update on the considerable work done in Marseille about hydroxychloroquine, and to learn about Professor Raoult’s take on the future of the pandemic, refer to this article.

Another study not mentioned by Dr Anthony Fauci is the one from Brazil, showing a sharp decline in the need for hospitalization thanks to early treatment with a combination of hydoxychloroquine, azithromycin and zinc.

This is obviously hugely controversial, and it’s not the end of the story.

Fauci’s speech may well go into the history books as a prime example of questionable scientific practice.

Or would the US decide on a drug, hundreds times more expensive than hydroxychloroquine, proven to be ineffective, to become the “standard of care” for patients suffering from the deadly COVID-19 disease?

Note that, since publishing this article, the US Food and Drugs Administration has provided emergency use authorization, that allows “for remdesivir to be distributed in the U.S. and administered intravenously by health care providers, as appropriate, to treat suspected or laboratory-confirmed COVID-19 in adults and children hospitalized with severe disease.”

We also provide an analysis of this development in this article.

Here is the transcript of Dr Fauci’s speech at White House (media release is below).

Hospitalized patients with advanced COVID-19 and lung involvement who received remdesivir recovered faster than similar patients who received placebo, according to a preliminary data analysis from a randomized, controlled trial involving 1063 patients, which began on February 21. The trial (known as the Adaptive COVID-19 Treatment Trial, or ACTT), sponsored by the National Institute of Allergy and Infectious Diseases (NIAID), part of the National Institutes of Health, is the first clinical trial launched in the United States to evaluate an experimental treatment for COVID-19.

An independent data and safety monitoring board (DSMB) overseeing the trial met on April 27 to review data and shared their interim analysis with the study team. Based upon their review of the data, they noted that remdesivir was better than placebo from the perspective of the primary endpoint, time to recovery, a metric often used in influenza trials. Recovery in this study was defined as being well enough for hospital discharge or returning to normal activity level.

More detailed information about the trial results, including more comprehensive data, will be available in a forthcoming report. As part of the U.S. Food and Drug Administration’s commitment to expediting the development and availability of potential COVID-19 treatments, the agency has been engaged in sustained and ongoing discussions with Gilead Sciences regarding making remdesivir available to patients as quickly as possible, as appropriate. The trial closed to new enrollments on April 19. NIAID will also provide an update on the plans for the ACTT trial moving forward. This trial was an adaptive trial designed to incorporate additional investigative treatments.

The first trial participant in the ACTT trial was an American who was repatriated after being quarantined on the Diamond Princess cruise ship that docked in Yokohama, Japan, and volunteered to participate in the study at the first study site, the University of Nebraska Medical Center/Nebraska Medicine, in February 2020. A total of 68 sites ultimately joined the study—47 in the United States and 21 in countries in Europe and Asia.

Remdesivir, developed by Gilead Sciences Inc., is an investigational broad-spectrum antiviral treatment administered via daily infusion for 10 days. It has shown promise in animal models for treating SARS-CoV-2 (the virus that causes COVID-19) infection and has been examined in various clinical trials.