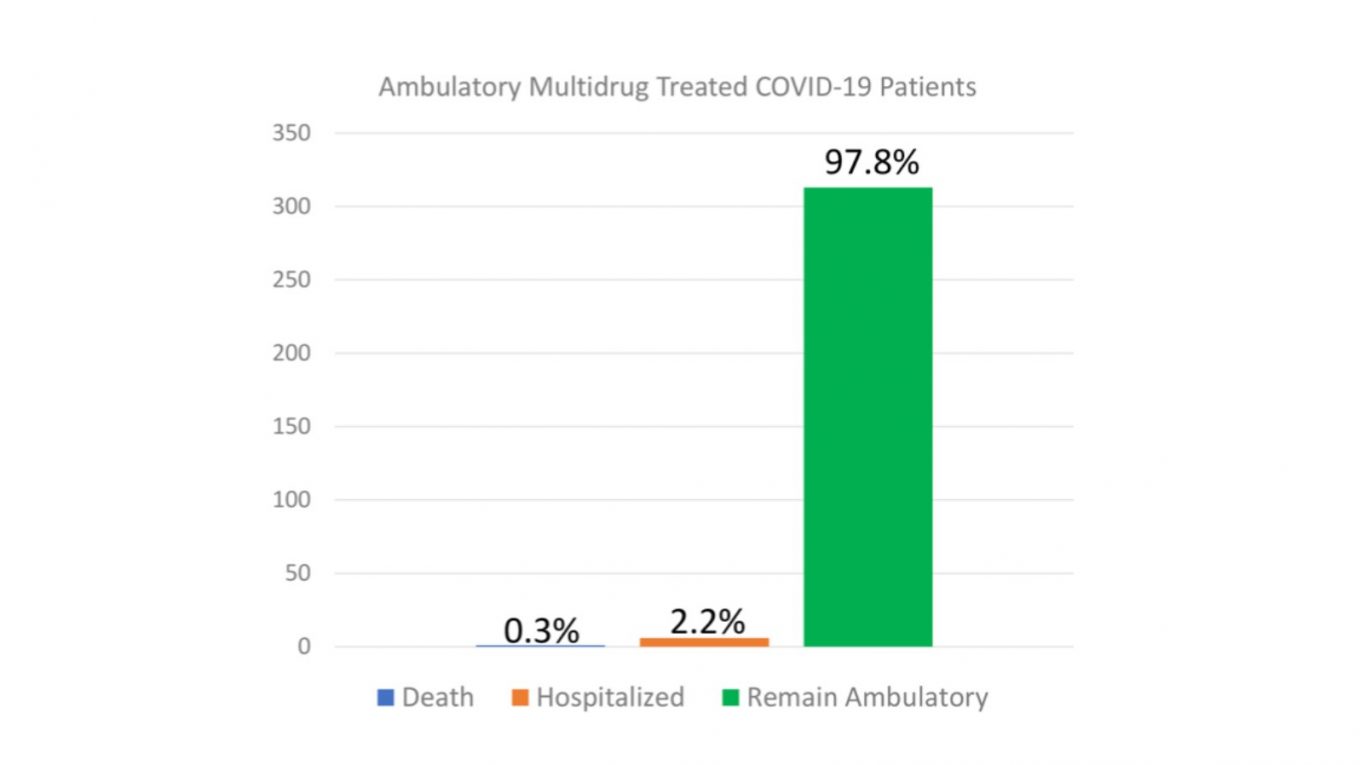 With the pandemic raging in many countries, the fear to be hospitalized is high. Situations vary, but the risk of in hospital death from C19 can be 20%, 25% or even higher. These patients will have typically spent several weeks in intensive care, sometimes intubated – a procedure from which too few survive.

But what about reducing the risk of getting hospitalized in the first place? Anathema will say most medical doctors and policy makers. In most countries, there is no approved outpatient treatment for C19. Let’s follow the rules instead. People sick with C19 should go home, be left untreated, and wait with the hope of a natural recovery. And if that “therapeutic nihilism” does not work, it’s still time to get to the hospital, and face a highly uncertain future.

But some medical doctors did not buy in this recommendation not to treat prior to hospitalization. They are not many, but there are some. And they typically have been demonized by the media, as charlatans or snake oil salesmen, and sometimes censored on social media, because the therapeutic outcomes they were claiming were just too good to be true. Or maybe there are more obscure reasons, but we will not venture into this here.

We are now months into the pandemic, and some very serious studies are now coming out, looking at the therapeutic outcomes achieved by those medical doctors who chose not to follow the official recommendations, and instead treat the sick before hospitalization, as outpatients. One of those medical doctors is Dr Brian Procter, from McKinney, Texas, who started treating C19 patients since March.

The study is about 922 outpatients who were evaluated from March to September 2020 by lead physician Dr Brian Procter and four advanced practice practitioners (CR, VP, ES, CH), who responded to urgent visits by patients with suspected SARS-Co-V infection and symptomatic COVID-19.

Among the 591 test negative patients, 162 (27.4%) were considered false negative tests because they were developing persistent or worsening symptoms of COVID-19. A total of 320 patients (34.2%) received treatment.

Treatment was given according to a risk stratification. Only patients aged 50 or over were treated, except for those with comorbidities such as obesity, diabetes mellitus, cardiopulmonary disease, chronic kidney disease, etc).

Treatments were customized to patients and evolved with time, with the experience acquired by the team and knowledge available from other sources. A combination of agents were typically administered sequentially in time. The table below summarizes the key supplements and medications, prescribed off-label, administered to patients.

The execution of the program was heavily dependent on telemedicine technology, even if in person consultations also took place. Patients were followed for a minimum of 90 days.

What are the therapeutic outcomes? Out of the 320 patients who were confirmed positive and who received treatment, there were 6 hospitalizations and one death.

The graph below encapsulates the therapeutic results achieved by Dr Procter and his team. This is a revised version forwarded to us since the publication of the article.

Among the authors’ conclusions, one reads:

“The observations in this report suggest that primary care physicians can take an organized, empiric approach to acutely ill patients with COVID-19 with very low rates of subsequent hospitalization and death.”

“Our observations suggest a majority of hospitalizations could be avoided and the spread of SARS-CoV-2 can be reduced with a first treat-at-home approach featuring telemedicine during follow-up.”

“The advancement of early home use of off-target antiviral agents (zinc, HCQ, ivermectin, azithromycin, doxycycline), antibiotics, corticosteroids, and in the future empiric anticoagulants could markedly reduce the risk for hospitalization and potentially reduce overall death rates before and during hospitalization.”

This is a retrospective observational study without control group. What would be expected as therapeutic outcomes without treatment?

They went on to develop a risk assessment tool, which you can use to assess your likelihood of hospitalization, if you get C19 (without any preventative agent or vaccine).

Another possible comparison is the hospitalization rate in the control group used by Derwand et al in their research on the therapeutic outcomes of the practice of Dr Zev Zelenko in NY State.

Hospitalization rate in the control group was 15.4% while it was only 2.8% in the treatment group.

The risk of death is probably substantially reduced too, and estimated at 61% by the authors (see above graph) but the cohort size is insufficient to draw firm conclusions.

Another important aspect is that early treatment likely reduces the risk of long term C19 symptoms, which are plaguing the day to day lives of numerous survivors.

The study confirms that it’s possible to considerably reduce the number of hospitalizations with outpatient treatment of C19, and this has considerable policy implications.

Today, numerous hospitals and intensive care units are struggling with constant influxes of C19 patients, while the number of admissions could, drawing from the therapeutic results by Dr Procter, Dr Zelenko and others, easily be divided by 5.

Yes, you read it well, and please let this number sink in. One could have at least 5 times fewer admissions in hospitals and in intensive care units from C19 if early at home treatment for C19 was generalized.

This means there would not even be any hospitalization crisis in most instances.

As we previously analyzed, such early outpatient treatment is perfectly implementable in aged care facilities, nursing homes and similar institutions, where the risk of contracting C19, and dying from it, is by far the highest.

In terms of cost, inpatient treatment, especially in intensive care, is extremely expensive, with hospitals bills often running in the hundreds of thousands of dollars, sometimes exceeding 1 million dollars.

Outpatient treatment for C19, on the other hand, is typically extremely cheap: less than US$100 for the medications, plus the cost of a few consultations and tests.

Let’s hope that this real life experience of successfully treating C19 on an outpatient basis will contribute to convince more policy makers and medical doctors to embrace outpatient early treatment for C19, which remains in most countries a neglected tool to fight the pandemic.