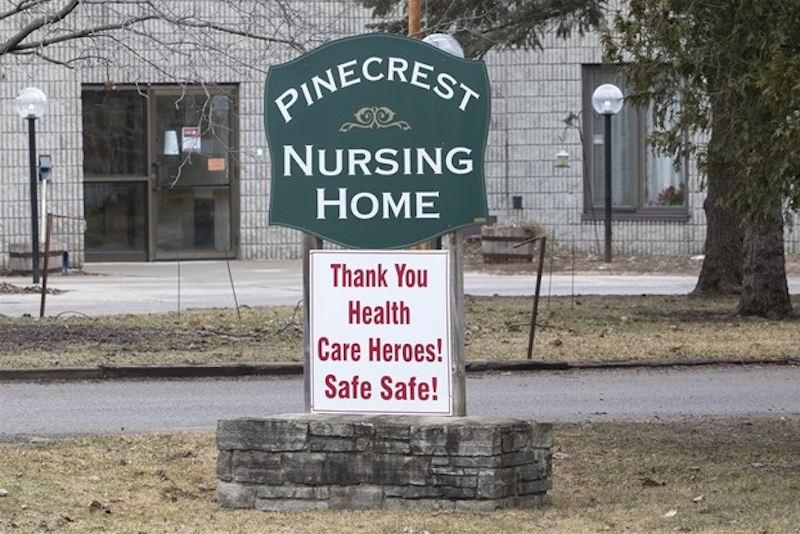 Since the beginning of the epidemic, the dramatic fate of many elderly people, taken as hostages in infected nursing homes, has repeated itself again and again, in many countries, including France, Canada, USA and others.

In Quebec, close to Montreal’s international airport, 46 elderly people lost their lives at the Herron CHSLD. Another dramatic example is the Pinecrest nursing home in Ontario, with 28 deaths among its residents. (see picture). Such examples abound very unfortunately, in the US, in France and elsewhere.

In this article, after some context, we look at “strong anecdotical evidence” presented by Chris Martenson PhD – on his popular youtube channel.

Yesterday, the director general of the World Health Organisation reminded us of the official position of the organization, that there is no cure for COVID-19.

The reality is however very far from what WHO claims. There are many instances where therapeutic treatments considerably reduce the progression of the disease, the likelihood of long term physical impairment and the likelihood of death.

The evidence that effective treatments exist is pretty overwhelming, and today, Professor Didier Raoult released new therapeutic results at the IHU Marseille, this time on 3,737 patients, with a fatality rate of less than 1% among those treated.

Despite these and similar previous results, the French government decided to disregard the research by the world’s top expert in infectious diseases, Professor Raoult, and to follow the WHO, which used the immensely controversial, conflicted and possibly fraudulent The Lancet study released last Friday to essentially prevent the use of hydroxychloroquine in France to treat patients.

See the media release by the French ministry of health essentially banning now the medication in France.

The alleged risks associated with HCQ are mostly cardiac. In the Marseille research results, on 3,737 patients, released today, it can be read:

“QTc prolongation (>60 ms) was observed in 25 patients (0.67%) leading to the cessation of treatment in 3 cases. No cases of torsade de pointe or sudden death were observed.”

What looked a bit like a conspiracy theory, that the main problem with hydroxychloroquine is that nobody can really make money out it, as it’s a generic drug, seems increasingly believable.

Follow the money, as goes the saying, but this is not where this article is going.

Now, what about nursing homes, where thousands and thousands died, and are still dying? For example, according to the Washington Post, it’s 81% of all coronavirus deaths in Canada that occurred in nursing homes.

How were such numbers reached? In most cases, elderly people are left dying in the nursing home, and little is done to save them. They are typically not sent to the hospital. There are supposed to be isolation measures, within the nursing homes, to prevent the spread of the virus, but those have largely failed.

In fact, not only do elderly people, but also the personnel, typically get infected. And more recently in Canada, there are military people, called to the rescue, who were also infected.

Situation in many nursing home is horrendous. And the problem is not only a Canadian one of course. In France, the situation in the so called EPHADs is also terrible.

The nursing home disaster was actually foreseen by the French authorities, which authorized the use of the very strong rivotril sedative in nursing homes, to alleviate the pain of sick residents close to their death…

In New York, it’s now well understood that an ill-conceived decree by the governor – yes the one who is interviewed frequently by his brother on CNN, the brother who healed himself from the virus with a new age “corona protocol” – forced nursing homes to accept infected patients, and that it accelerated the spread of the disease and clearly is an important cause of death in New York.

We have already covered in various articles that there is absolutely no reason to have such high fatality rates in nursing homes. See for example our articles about many very old people, including centenarians, who survived COVID-19, thanks to hydroxychloroquine-based treatments.

We will also publish shortly a part of our interview with Professor Varon, where he explains how he successfully treats both young and elderly people suffering from COVID-19.

Could Mortality in Nursing Homes be Divided by 10?

Now, how many could be saved with early treatment based on hydroxychloroquine? This is the question Chris Martenson, PhD, covered in his May 26 youtube video.

In this Texas nursing home, 56 residents and 33 staff members were found to be COVID-19 positive.

Dr Armstrong estimated that they could lose 15 to 20% of residents if they did nothing.

Hydroxychloroquine, Zinc and Zpac (azithromycin) were administered as soon as a resident first started showing symptoms.

Armstrong also says they did EKGs on each of the patients.

Armstrong said one of his nursing home patients died.

The ratio in this situation is about 10 to 1, meaning that 90% of the deaths could have been avoided.

In Canada, with to date some 6400 deaths attributed to COVID-19, and about 80% of them in elderly homes, saving 90% of those elderly would mean that about 5000 deaths could have been prevented.

And let’s remember, this is a treatment that basically costs nothing and that does not require hospitalization. It can be administered within the nursing homes, as was done in this Texas experience.

Most, if not all these horrific situations that occurred in Canada, with staff refusing to go to the premises and leaving the elderly dirty, unfed, dehydrated, to let ultimately dying, could have been avoided.

The situation is still in fact ongoing, with numerous elderly homes still being infected and with no plan to provide treatment.

Health Canada, like the the World Health Organization, made it clear: there is no treatment, and hydroxychloroquine is dangerous …

It seems unlikely that what increasingly looks like a geronticide will be stopped anytime soon by the fearful Canadian federal government and its provincial disciples.

In France, with the new decree essentially banning hydroxychloroquine except in clinical trials, the loss of lives among elderly people can also be expected to continue, even if the pandemic recedes.

And of course, numerous lives of health care workers, who are disproportionately infected, continue to be at risk, even if many could also be saved with the 20$ treatment.

To get back to the Texas nursing home, 98% of those staff who were infected, and who received the hydroxychloroquine-based therapy, are reported back at work.

According to Chris Martenson, “Anecdotal Evidence is Strong.”

See our previous article about COVID-19 and nursing homes, dated over a month ago, that reached similar conclusions.