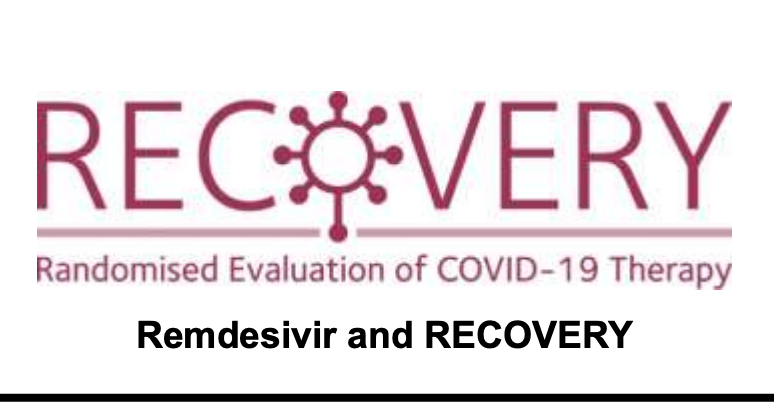 Little noticed was an announcement on May 27 by the Oxford RECOVERY trial that Remdesivir was now available for those participating in the trial, encompassing over 10,000 patients in the UK.

“RECOVERY participants can receive remdesivir and continue their assigned
treatment(s) in RECOVERY,” says the statement.

Remdesivir is a drug very well known by one of the “Chief Investigators” of the Oxford RECOVERY research, Professor Peter Horby, as he is one of the co-authors of the first peer-reviewed study about remdesivir, published in The Lancet on April 29. (no it’s not the infamous Mehra study)

The Lancet published randomized controlled and peer reviewed study by Wang et al. found that “remdesivir was not associated with statistically significant clinical benefits” both in terms of reduced mortality or reduced length of hospital stay.

The RECOVERY trial initially intended to test Remdesivir, but that was not done, apparently because the drug was not available at the time.

So what does the RECOVERY trial rely upon for this decision to now widely offer remdesivir as a treatment, including on top of other tested treatments?

It actually refers to preliminary, non-published, non peer reviewed results of another study, the one also that Dr A. Fauci referred to at the White House on April 29.

“Preliminary results have since been published which demonstrate that participants assigned remdesivir had a shorter time to recovery: median 11 versus 15 days … Mortality at 14 days was numerically lower …” states the RECOVERY Trial.

Note the “numerically lower” terminology, used to avoid any reference to statistical significance. The preliminary results of that NIH study indeed don’t show any reduction in mortality with the remdesivir treatment.

It’s not clear how the Oxford researchers have found a way to finance the pricey remdesivir drug. They may have been donated by its manufacturer, but there is no specific information available in that regard.

From what transpires from the announcement, it looks like access to remdesivir is available to all patients, and is therefore not randomized. Accordingly, it looks like it will be part of an observational study, and not a randomized one.

The official position of the UK government is to offer medications only if they are proven by (randomized controlled) research to be effective.

Well, it looks like the Oxford RECOVERY Trial academics have found a way around. They are now offering a treatment known to be ineffective in reducing mortality to any volunteer patient who wants it.

Meanwhile, the treatment combining hydroxychloroquine and azithromycin, that delivers fatality rates lower than 1% at IHU-Marseille, versus 25% fatality rate in the RECOVERY trial, is not offered to patients in the UK, including those in this Oxford-sponsored research.

Note that the remdesivir treatment is considered to be toxic by IHU-Marseille Professor Didier Raoult, who in an April 28 interview, said:

“I have always said that one needs to treat people early, and to treat them, we must give them medications with anti-viral properties that are not toxic … one cannot give people toxic medications … the risk is too important versus the anticipated benefit. It’s one of the reasons that medications such as remdesivir cannot be prescribed for this.”

See our previous coverage about the RECOVERY trial: