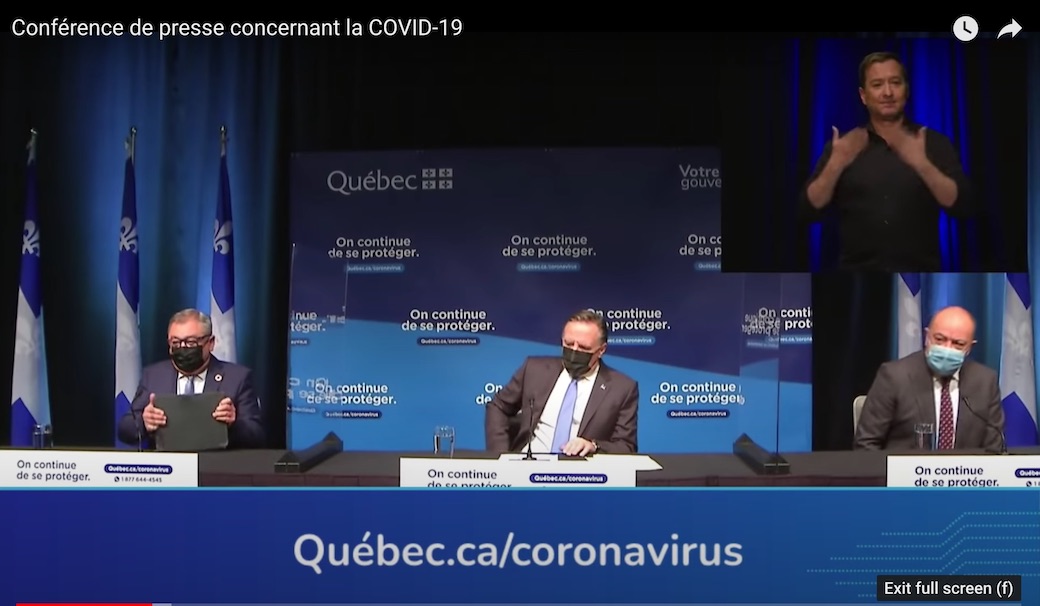 Update: It appears that this plan has been dropped by the Quebec government, incidentally following the resignation of the person who seems was its instigator, former director of public health Dr. Horacio Arruda. This move was probably too dissuasive to take the booster shots recommended by the authorities …

An important announcement was made by the Government of the Canadian province of Quebec on December 30, as part of a press conference called to announce additional emergency measures to counter the considerable increase in new cases in the province. (voir version française)

The press conference brought in François Legault, the Premier of the province of Quebec; Dr. Horacio Arruda, the National Director of Public Health, and Christian Dubé, the Minister of Health.

The main measure announced was the reinstatement of a curfew, effective on December 31, which had the immediate effect of canceling the new year, with huge fines, from 1,000 to 6,000 dollars, for those not obeying.

Out of compassion, however, the authorities allowed the people to celebrate in their “family bubble.” This New Year’s cancellation comes on top of a host of previously announced restrictive measures.

It was in the question and answer session of the press conference that the unexpected announcement of the ‘natural booster’ was made.

Here are selected excerpts translated to English – please refer to the original in French if needed.

Question: “There are several citizens who have tested positive after receiving their second dose. There are Swiss in Quebec who say that these citizens would not need their third dose or their booster dose. Is that the case? Does a citizen who has received two doses, who caught Covid, need or does not need a third dose?”

Response from the National Director of Public Health Horacio Arruda: “Expert recommendations show that if you have received two doses of messenger RNA, from Pfizer or Moderna, and you have had the disease, this disease confirms you as if it were a third dose. This is the current recommendation. What is also important is if you have had any symptoms, your positive test will then be more valid. This is considered a third dose. ”

In other words, the Quebec authorities have decided that recovering from COVID-19, when you already have had two doses of vaccines, is equivalent to being injected with a third dose!

It is not clear on which experts and which scientific data the Quebec authorities base themselves on to suddenly recognize natural post-covid immunity for those who have already been injected twice. To be noted is that this recognition excludes those having received one dose or no dose at all …

The announcement by the Government of Quebec also relates to the vaccination passport, which is required for many activities in Quebec.

Question: “And for the vaccination passport, how will it work, for the citizens who are in this situation?”

Response from Minister of Health Christian Dubé: “The issue is what we do with people who test themselves. We made a decision in the last few days. There will be a website that we will make available where people will be able to register… the fact that they have been screened… there we are going to have a reconciliation… this is information that is on a voluntary basis… ”

The new concept of the Quebec authorities is therefore to incorporate recognition of natural post-covid immunity in the vaccination passport, according to modalities that remain to be defined.

Lesson for citizens: Keep any documentation proving that you have tested positive, and if possible also documentation of your symptoms, to ensure that you will have your natural immunity validated by the governmental bureaucracy.

If the safety of COVID-19 mass vaccination had been handled as for previous programs, it would have been suspended in March 2021, or even earlier.

During the press event, the Quebec authorities continued their strong promotion of the injections, even for the Omicron which generally generates a quite mild illness. Without referring to specific data or studies, the Minister of Health stated that we get much less sick with Omicron if we have been vaccinated.

“We all know people who have been infected in the last days. What’s disappointing, and I’ll start on the negative side, is that people think… ‘I had two doses, and then I got it anyway.’

“Look at people, when they’ve had two doses, and they catch Omicron, they say to themselves, basically, I have it for 2 or 3 days, it’s difficult and then it goes. That’s the good news. It’s because you got the vaccine. If you weren’t vaccinated you would probably have been in hospital or even in intensive care. People shouldn’t forget that.”

The fallacy of this argument is analyzed in detail in our interview with Dr. Shankara Chetty, which you can watch, listen to, or read a summary of.

As a reminder, in the Province of Quebec, as everywhere in Canada, therapeutic nihilism is practiced, with zero pre-hospital treatment for COVID-19, and poor quality hospital treatments, based on an ineffective and toxic drug, which the The World Health Organization no longer recommends since November 2020.

Therefore, hospital admissions for Covid-19 in Quebec, and more generally in Canada, are largely due to the absence of pre-hospital treatment, which offers protection much greater than the 75 or 80% mentioned by the Minister of Health.

Despite this surprise announcement of the recognition of this ‘natural booster,’ the entire message from the Quebec authorities remains to get vaccinated and to have booster doses administered, not only to protect yourself but also to protect others. This whatever the age!

Despite the high proportion of people vaccinated in Quebec, it is clear, with the considerable increase in new cases, linked with Omicron, that this protection of oneself and of others has not really worked well!

But the minister insists however: “I think there are all the reasons in the world to go for the third dose, no matter how old you are.”

Like all recommendations by the Quebec authorities, this last statement was made again without the slightest mention of the very real risks associated with these injections.

See also our in depth analysis about the policy implications of Omicron: