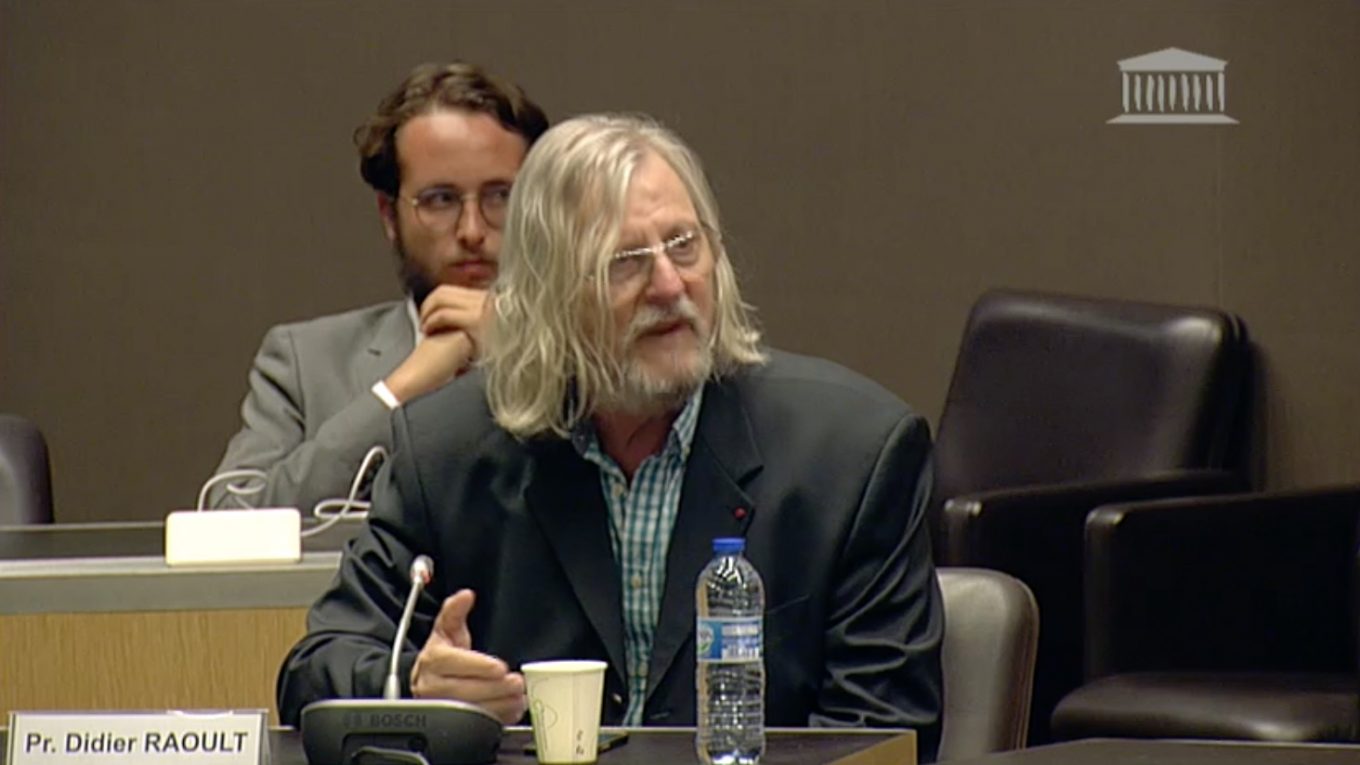 This Wednesday June 24, Dr Didier Raoult, the esteemed professor of infectious diseases at the IHU-Marseille, presented a shock testimony at a special commission, in the context of the “information mission about the impact and the consequences of the coronavirus epidemic, in all its dimensions,” by the French national assembly.

Professor Raoult’s testimony seemed to be feared by the president of the commission, MP Brigitte Bourguignon, from President Macron’s ruling party, who warned that the audition was not to be a TV series or a popular tribunal.

There were important aspects that were not covered in this testimony. For example, the role of the general practitioners, or more generally the so called city medical doctors – médecins de ville – was not given attention, while these MDs played an important role, despite the numerous restrictions imposed on them by the French government.

Here are a few elements of Professor Raoult’s testimony, which was done under oath. Please refer to the full interview in French for details.

Recommendation of an inquiry into Gilead / Remdesivir

Professor Raoult suggested the members of parliament that an investigation takes place into Gilead Science. He is very adamant about a negative role having been played by the corporation during the pandemic. For him, Gilead Science’s drug, Remdesivir, initially developed for Ebola, never was a realistic option for treating COVID-19 patients. He also mentioned the stock exchange speculation that took place in connection with information becoming available regarding remdesivir and HCQ. He sees Gilead as a company operating with little personnel, with few products, but with tremendous influence.

Conflicts of Interest Abound in the Medical Profession

A significant part of the testimony of Professor Raoult was about the various conflicts of interest in the medical sector. He reminded how declarations of conflicts of interest came about in the medical field, as pharmaceutical companies have provided financial support and other benefits, including trips, for years, to medical doctors. He mentioned the example of Merck having offered fake professional trips to China to French doctors. Without using the word corruption, he suggested such “ecosystem” brings doctors to share similar views as the pharmaceutical industry.

Anonymous Death Threats Originating from Individual with Links to Gilead

Professor Raoult testified that, shortly after he started to talk about HCQ as a treatment, in March, he received anonymous death threats. He filed a complaint with the police, and an enquiry was opened by the French judiciary. The medical doctor behind the threats was found and happens to be from a Nantes university hospital. It happened to be the person who received the most money from Gilead over the past 6 years. Professor Raoult presents this as a “personal experience.” In his testimony, he remained diplomatic and suggested “to be attentive to this level of problem.”

Professor Raoult said he had been shocked to see the French doctor in charge of the SOLIDARITY clinical trials, which have yielded no results so far and seem to go nowhere, to use the informal “tu” and not “vous” to address Gilead’s director at a meeting, in front of the French president and health minister. Professor Raoult, whose father was a military medical doctor, said that he would not accept to be talked to in such a casual way.

No Direct Attack on President Macron and Health Minister Véran

Professor Raoult pointed at important mistakes done by the French government, including the prohibited usage of hydroxychloroquine outside of hospital settings, and the new restrictions on azithromycin. Yet he mostly blamed incompetent advisors to the health minister and to the president. He said he continued to have communication channels, during the crisis, at the highest level. He only named names in the case of the medication authority ANSM and the public health authority HCSP.

Professor Raoult revealed that his landmark study about the use of hydroxychloroquine and azithromycin as an early treatment for COVID-19 was not accepted by The Lancet. That happened the very same week as the venerable British scientific journal accepted the now infamous study about the alleged high dangers of hydroxychloroquine, relying on fake data, by Mehra et al, which has now been retracted.

Professor Raoult Says He Did Not Take HCQ as a Prophylaxis

We all remember the media frenzy that followed President Trump’s declaration that he had taken HCQ as a prophylaxis. Professor Raoult, not asked that precise question, said he did not take any as prophylaxis. He insisted on washing hands and wearing mask as key personal protection measures.

Not Treating People Early Was a Serious Mistake

He emphasized that not treating people early was a big mistake. He said that the lack of breath was a very bad sign, as people short of breath can already suffer from severe hypoxia, at 90%. Those people sometimes have to go directly to intensive care. He also mentioned the severe lung damage that frequently occurs – in about 65% of the cases – with COVID-19 infected people not being short of breath.

Prohibition of Hydroxychloroquine Was Wrong

Professor Raoult reminded the members of parliament that until last year, hydroxychloroquine was a very commonly prescribed over the counter drug, and that suddenly, it became kind of a poison. He said that he was in disagreement with its prohibition by the State, and was very surprised that the medical board had accepted such prohibition, suggesting he would have immediately resigned, would he have seated on that board.

HCQ in the Middle of a US “Civil War”

While recognizing the many restrictions on hydroxychloroquine in France and in other European countries, Professor Raoult indicated that the drug was widely recommended internationally, in countries totally 4.5 billion inhabitants globally.

France Not Ready for such Crisis … since 2001

Professor Raoult explained how France, in 2001, proved to be incapable of dealing with the anthrax situation. From his perspective, the inability of the country to cope with COVID-19 was not really a surprise.

He elaborated in some detail about what he considers to be France’s inadequate structuration of the health system, with its various reference centres. He said that it’s not at all appropriate with our current technology, able to test numerous diseases at the same time. He is in favour of several large centres, such as the IHU-Marseille, spread across the country.

Professor Raoult commented on the scientific committee that has been put in place by the French government to deal with the COVID-19 crisis. He was appointed to that committee, but left it very quickly. He said the committee was not really dealing with science and that he had no time to waste with non-science based discussions.

Professor Raoult repeated his principle of not making any kind of predictions. Yet he commented on the bell curve of the epidemic in Marseille and in France in general, and on such curves having been observed in the past for other types of coronaviruses. He also mentioned that the epidemic ended about one month earlier in Marseille, with the deaths still being counted in Paris, while just a few new cases were being counted in Marseille.

Testing was Essential, and It Came Too Late

For Professor Raoult, it was essential to test, to test early, and to test on a large scale, like he was able to achieve in Marseille. He insists that testing was key to learn about the new disease. He expressed his disagreement with the decision by the authorities not to generalize testing at an early stage, stressing that the testing capabilities existed in France.

Remember, IHU-Marseille implemented early testing on a wide-scale, with long lines of people suspecting to be infected. Thousands of PCR tests were done, on a daily basis, at the peak of the crisis.

With the emphasis on randomized research, on the various competing drugs, and the public debate about the alleged dangers of hydroxychloroquine, Professor Raoult suggested that treatment became sort of a secondary matter. He alluded to the “gold standard” randomized studies so much lauded by the medical research establishment, in France and in countries like the UK. For him, in some instances, patients were transformed into guinea pigs. He mentioned the example of the Oxford RECOVERY trial where hydroxychloroquine was used at quadruple, toxic, dosage on the first day.

Professor Raoult insisted that his research methodologies were fully appropriate. For him, methodology is not science, it’s just a tool to serve science. He suggested that those who believe that non-randomized studies are inappropriate don’t understand anything. For Dr Didier Raoult, who is also a professor in epistemology, especially when a disease is new and unknown, observational methodologies are fully justified.

Professor Raoult emphasized how the COVID-19 crisis brought the very best out of many, at the level of the staff of IHU-Marseille and in the community. He said that happened despite what he was doing was innovative. Despite strong opposition, there was huge support from the staff. He said people felt valued and recognized for their efforts. There was nearly no absenteeism and the personnel did not count their hours. Likewise, people in the community were strongly supportive, applauding the personnel, and offering meals, bottles of wines, etc.

If you want to have an idea about the popularity of Professor Didier Raoult in Marseille, check this video!