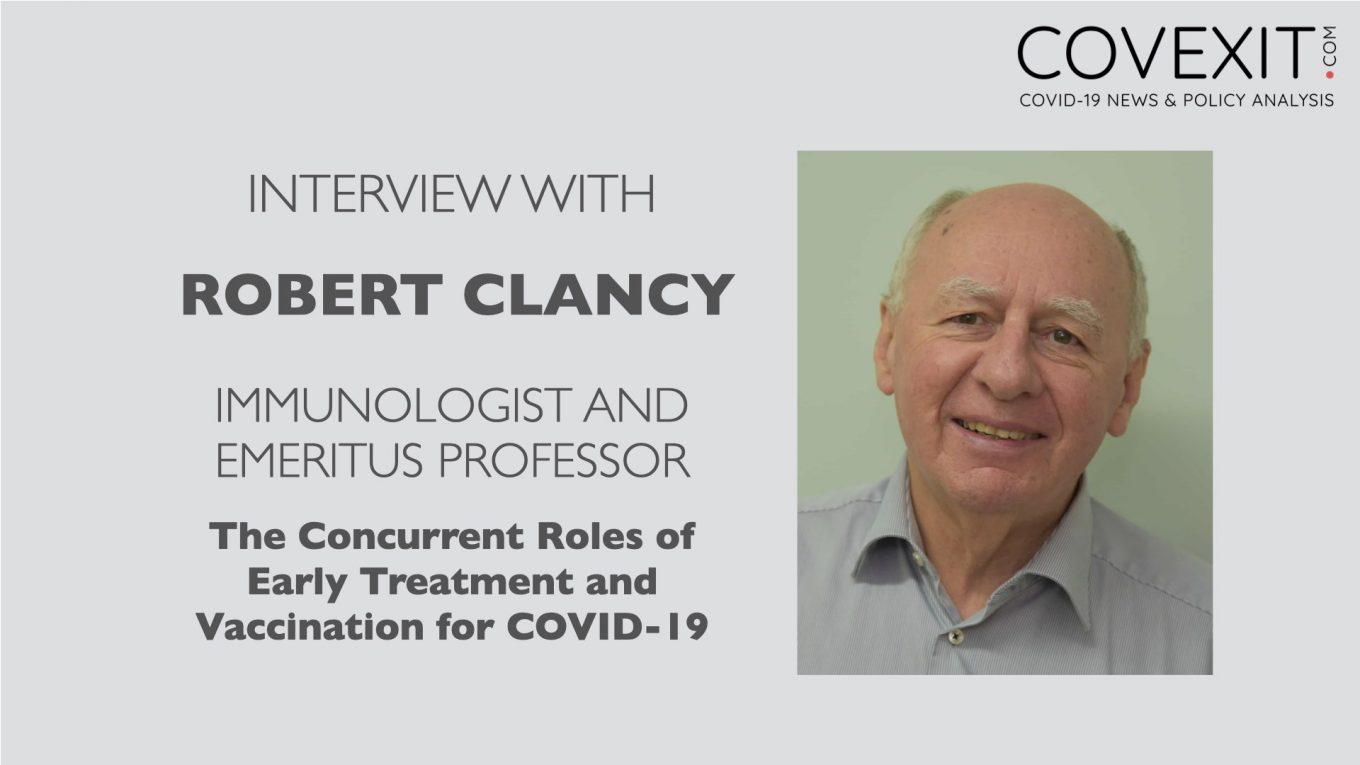 We are pleased to present an interview with Professor Robert Clancy from Australia, who agreed to provide his thoughts about COVID-19 and vaccination.

Professor Robert Clancy, AM DSc PhD MB BS FRACP FRCP, is a retired Australian clinical immunologist and a pioneer in the field of mucosal immunology. One of his achievements was the development of the vaccine Broncostat at the University of Newcastle in 1985. The Broncostat vaccine reduces attacks of acute bronchitis to a degree of 90%. He is also known for his research and development of therapies for chronic obstructive pulmonary disease, commonly known as emphysema.  Professor Clancy is the author or co-author of some 260 academic publications.

Professor Robert Clancy attracted some media attention lately, as he was quoted by now independent MP, Craig Kelly, for acknowledging the unthinkable, especially in Australia, that ivermectin and hydroxychloroquine are effective agents for COVID-19 when administered early.

In media interviews, Professor Robert Clancy reaffirmed his position, describing the height of the media frenzy, earlier this month, as the worst 24 hours of his life.

“The data is crystal clear … ivermectin and hydroxychloroquine are of significant benefit when used early in the disease.” – declared Professor Clancy to 6PR Radio’s host Liam Bartlett

While supporting such early treatment agents, Professor Clancy is also supportive of vaccination, and this is what this interview, which was done in writing, mostly focuses on.

In your January 17 article in the Australian publication Quadrant Online, you argue that both vaccines and early outpatient therapies are needed to tackle COVID-19. Broadly speaking, can you explain why?

Both vaccines and early treatment are needed. Vaccines will not be 100% effective; the mucosal compartment is subject to different rules than is the rest of the body – flu vaccines are a classic model where protection is 20-60% each year, and only lasts about 12 months (due to the characteristics of the mucosal immune system). In addition, many will, for various reasons, not be vaccinated.

Are both vaccinations and earlier COVID-19 infections both delivering similar immunity?

We know that the aim is to prevent mucosal infection – this requires activation of the mucosal immune system. Only natural infection does this – injection vaccines primarily activates systemic immunity, i.e. there are two immune systems.

Protection depends on how well the systemic immune response can “overflow” in the mucosal compartment.

In a nutshell, what is highly relevant for COVID-19 vaccination from the experience with flu vaccines?

Flu infection simulates COVID-19 i.e. a virus infection limited to the mucosal compartment  – so patterns of immunisation outcomes are similar. (though flu is a good model, and may predict how covid vaccines will be)

Do you think herd immunity may be progressively reached?

Probably when infection rate is high. But it will only last for months and will need continued immunization (or infection) to maintain it.

With variants emerging (UK, South Africa, Brazil) and continuous mutations of the virus, what’s the impact on herd immunity?

Good point. Like flu, there will need to be continuous antigen modification each year, i.e. we need to select a vaccine that can easily be modified to match prevalent virus antigens in community.

What’s the exit strategy for such isolated countries like Australia and New Zealand?

Interesting. It has not been thought through by either country. At the moment, neither country has significant community spread. All cases are in hotel quarantine (recent arrivals). Currently, we identify hotspots and close them down.  Big question is: when / how do we open national borders. I think this will be a long time unless the vaccine is better than I think it will be, or we integrate with drug prevention / early treatment.

In terms of safety of the various vaccines, do you see some vaccines being safer than others?

Too early to tell, but I have a concern re the mRNA vaccines. I don’t see vector vaccines becoming long term answers, with the likely need for repeated vaccination.  I like the idea of “classic” vaccines (China) or 21st century variations of these (NovoVax). By this, I mean “antigen vaccines” (which may use ‘cloned’ antigen like in the NovoVax vaccine).

What do you make of the high correlation between adverse effects, including deaths, and age.

I am concerned! It’s probably caused in part by impaired capacity to handle vaccine-related reaction with age. Plus older subjects likely have more circulating antibodies from long exposure to coronaviruses, thus get hypersensitivity reactions. (antibody-mediated disease)

In terms of per capita vaccination, Israel is at the forefront. Are there any conclusions you can draw from their experience?

Too early. But watch that space. It may give important lessons (but don’t hold your breath).

A disturbing development is a wave of adverse effects and deaths in the small territory of Gibraltar, that immediately followed vaccination. Can you comment?

No. Missed that. But same occurred in Florida and the US. It could be batch variations and poor quality control due to hasty vaccine release, though the ten-fold incidence of fatal “adverse reactions” with mRNA vaccines, compared with influenza vaccines, is concerning.

Germany decided that the Astra Zeneka vaccine should not be administered to those above the age of 65. What do you make of this decision?

Predictable and correct. but I predict same will be found for all vaccines when assessed over time. Look how long it took for the influenza and pneumococcal vaccines to have immune senescence understood. Mucosal immunity is very prone to immune senescence. (another reason we need early treatment). It’s a work in progress.

Regarding the elderly, what’s your take about the option of prophylaxis with an agent such as Ivermectin, for example in nursing homes / aged care facilities?

When the virus is prevalent in the community, it’s essential. (though I think that weekly hydroxychloroquine may possibly be better). I would see this as complementing vaccination.

Young people are known to be at very low risk of the disease. What’s your take on the vaccination of these low risk people?

I support vaccination of the young as “long covid” with persistent symptoms has been underestimated and its impacts on lifestyle (1 out of 2 can’t do full time work at 6 months). It also removes a source of infection. If you ever aim at herd immunity, you need to vaccinate kids.

I understand not everyone agrees with this — it may depend on the level of circulation of the virus in a particular community.

In the Great Barrington declaration, it’s proposed to essentially let the virus spread while protecting the high risk groups. Is this sort of equivalent to large scale vaccination of low risk people?

Great idea that does not work for many reasons: (i) limitations of natural immunity, (ii) They can get long term problems, especially fatigue, which can be incapacitating.

Again, where you live may influence this type of decision, related to the prevalence of the virus in the community.

What do you make of the jurisdictions which insist on vaccinating those who already got COVID-19? Is there any rationale?

It may be the reason that high incidence of “inflammatory” adverse reactions are being reported in countries with high prevalence of virus infections.

In your Quadrant article, you stress limitations with the adenovirus vector vaccines, to limit reinfections, and to be used in Sub-Saharan Africa. Can you elaborate?

Yes. The adenovirus vector has a monkey origin – you make antibodies to the vector. — a subsequent injection will be neutralized by these anti-adeno antibodies. Most in Africa have been exposed to monkey adenoviruses.

Remember, the existing vaccines are using “clever” deliveries (mRNA and vector adenoviruses). There is no evidence that vector / genetic vaccines will ever be as good as classic (or neo-classic) vaccines. Only pharma benefits (with good patents)!

What’s your take on the various vaccines still in development? Are there any that you think may be more helpful?

I like “21st century classic” vaccines such as NovoVax, where antigen is injected rather than RNA or DNA.

Eventually, someone will work out vaccines that stimulate T Cell immunity, yet so far, it has been unsuccessful for the flu.

Have you looked at the question of immunity passports?

No. Question is: “What is an immunity passport?” as we have no good markers. The certification contemplated by the Australian government may be a “false flag.”

In Australia, do you see any positive signs towards the acceptance of early outpatient therapies by the authorities? Has Professor Thomas Borody been finally heard?

I hope. Sadly, we have the Western disease. Borody was my PhD student (when he was 60!!). Very smart, but had to achieve from private practice. He developed therapies for helicobacter & Crohn’s Disease. So don’t underestimate him.

The total focus at the moment is on “protecting” vaccines despite concerns (probably) shared by government.

Currently, the only federal politician promoting science-based drug treatment is pilloried by the press, political opponents and … sadly, members of my profession, who should know better.

The foodbank queue in Milan.

This is what happens when you slam the economy shut for months on end because of draconian restrictions. The outcome - a cost of living crisis and mass poverty.

My new Stack, on the White House's explicit demand that Twitter ban me, months before it did.

This is state action and a violation of my First Amendment rights, period.

Berenson v. Biden (and Slavitt), coming soon to a federal court near you.